The construction continues at the Duardin shipyard. It has been enlightening for me to try to emulate Warhammer: Age of Sigmar - or basically just the typical Games Workshop chunkiness. Yes, it is cartoony, and yes the dwarves are huge, and so are some of the details. Not to mention the over-the-top magic engines and the whole steampunkiness which adds no realism. Instead it adds some healthy playfulness, perhaps. Anyway, it has been a nice change of pace, and the chunky boat has gone from a small idea to something that starts to look heavily influenced by the offical models - but still something own, and still with the general "tech" looking somewhat like the original and some of the equipment as passable proxies for the bombs, the guns and mines. 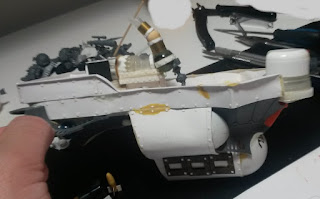 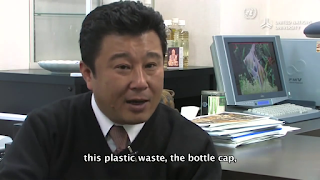 Most of the larger parts of this model is more or less plastic wast, bottle caps and so on... So I am fighting climate hoax. It used to be called global warming, all the ice on Iceland would explode before 2010, and as that did not happen, now they call it "climate change" because the weather is often different... 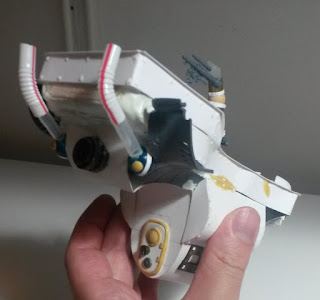 This little chunky fantasy door was a nice learning experience. It might look like a naval door, something found aboard a submarine, but the GW attention to detail was nice to try to emulate. In the end I had not the patience and simplified it - and as I said in a previous post: One door is enough, no need for one both starboard and the other side. 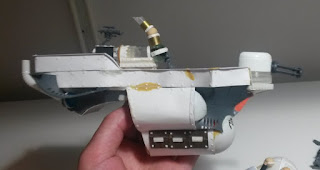 The pew-pew-pew cannon (model after the hand-cranked multi-barreled guns that was first used (maaaybe) in ACW?) is mounted on a state-of-the-art tower with a huge round railing of cogs that make it turn by handpower. The dwarf sitting inside has a little crank, just like the AA-guns of old had. 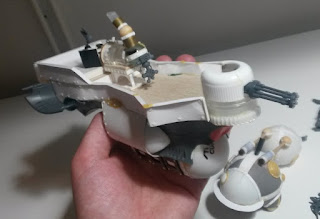 You can see the "dumbed down" versions of the fly-balls to the right in this picture. They have much less details than what the proper model has, mainly because if I would do the same amount without copying GW:s model straight off, it would not have turned out okay as it had needed a lot more thinking and planning than I felt like. Instead I filled it with as much details as I could stomach - coming from Lord of the Rings-models - and didn't bother with the huge iron heel which should edge around the two halves of each ball, as there are no welding in Age of Sigmar. I pretended that the Duardin had managed to make it pressure proof in some other way. The metal banding is impossible to keep it together and quite difficult to construct, but who gives a flap? 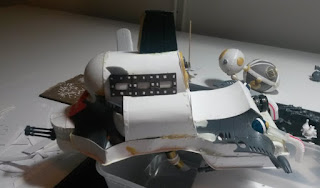 Added fins that are much less characterful than the real Ironclad. The fins on the original is nice and fancy but I prefer this, especially as I am growing bored with this project and its details. 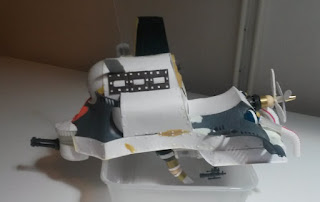 ... speaking of the weather, it has been very warm here in Swedistan. I don't know how hot but enough for me to rather stay at home. Doing hobby was not pleasant as I was too lazy to move my tabletop fan to the table I was working at. Besides, it would have fanned all the little parts down on the floor. 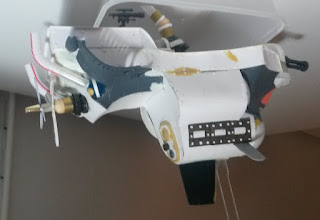 A few weeks ago I had to use mittens and a beanie when going to work. Beginning of July?! Very cold. 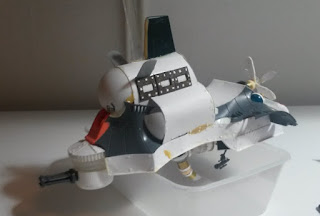 Double propeller attached, model now has to sit upside-down to not break. I am dreading how the flight stand will manage... when the fly balls are attached its weight will increase with roughly 30-32%, and it barely stands now. It's the main, bottom fin that makes it difficult to mount it properly. 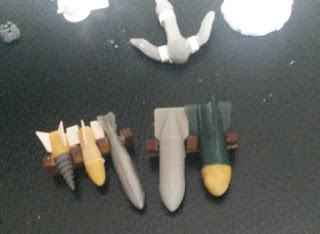 These are the five drop-bombs that I managed to scrounge up in my bits boxs and drawers. I can only hope they will meld well into the rest of the model so one doesn't give them too much attention as they really could use a lot of work. Work I am not willing to put in. Again, the official model has 6 on each side, three types. One fragmentation, one drill and another one. In the fluff they can be used for various types of mining, IIRC. 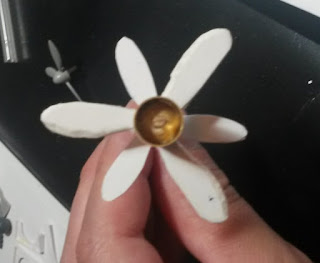 Going with GeeDubbs design, but simpler, I settled with a pair of propellers on a single axis, instead of five or ten. 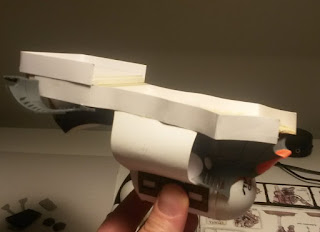 And this is where I left off last time I posted about this beast. 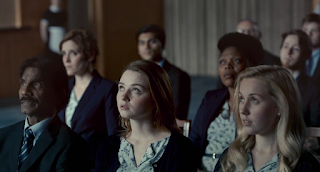 "Yes, that is correct." the reader said looking at said picture. That's you readers, you are two ladies. That's how I see you in my mind's eye, as they say. Two bored ladies reading about... about... about, I don't know really anymore.

Would it be wise to do a whole army Kharadron inspired by the bad guys from Dune? One of them has a fly-thing... 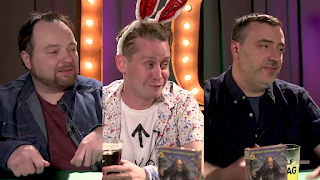 "You go right ahead, Llama." the readers said in chorus smiling ironically. Okay, that might be a little too much...
Upplagd av Llama kl. 09:36 2 kommentarer:

On this grand day 563 years ago a glorious Hungarian force under command of Janos Hunyadis conquered the besieging Osmans at the battle of Nándorfehérvár. So, today - amongst other victories of July 22nd - we celebrate the national memorial day of Hungary. Hungary is a wicked sick country - go there if you haven't: Great people, great culture and overall just a class A nation (one of their best authors being Ferenc Karinthy, IMO). Old history, ancient folks, strong and powerful they remind me somewhat of the Polish, but not too much. Don't get me started on the Polish - yes, some are drunkards - but most of them are headstrong and will tell you what needs to be told and will give you a sound beating if you need it.


But those good memories aside, let me tell you about Warhammer: Age of Sigmar, and how this blog is not dying. I have been talking to mr J about doing some serious hobby when we meet up later this year in the old Southern part of Le Africa, and I have expressed a slight lust for Kharadron Overlords, even though I greatly dislike the NEET Omega-male Dwarfs of Warhammer (sorry, "Duardin"). Steampunk is gratifying to hobby with, just take some old gears and plop them on a model and voila, Bob's your uncle, as they say, the Britons. 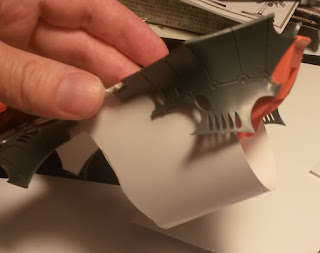 The idea here is to make my own version of the Kharadron Overlord's Ironclad. As I have no idea of the size of the official model and I have very little motivation to find that out, I have just winged it. Had to go to my not-so-friendly LGS and buy me a box of those three retards with iron balloons that think they can fly, just to get an inkling of the size of things. Warhammer models are laughably chunky and oversized. The feets of the dwarfs are roughly the size of a single Middle-earth model... 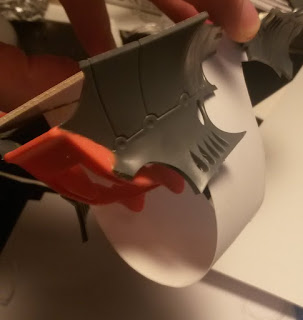 Anyway. Starting with what I had at my new home at the time, some twenty days ago, I used parts of the 40K Dark Eldar boat I bought cheap for the simple reason that it contained numerous usable bits. These parts combined with the orange "bow" I salvaged from the printer I smashed in anger (see older blogpost where this outbreak of bad temper has been described in detail) formed the basic shape. Pleased with the cramped space for the space dwarves I continued my project... 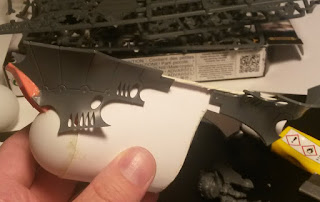 A ping-pong ball formed the rest of the lower hull's front, just below the bow. It fit nicely with the paper hull. 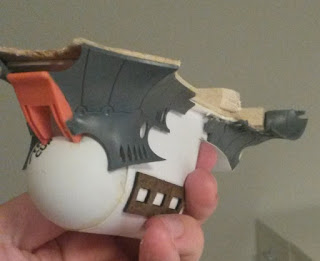 Turned the rest of the Dark Eldar hull around and inverted the parts, and voila, some form of basic Duardin hull was formed. The strange windows weren't easy to get (had to go to a local Makerspace to get them lasercut), but I really don't like the overuse of "navally" round windows, dwarves in WHFB should have at least a few square windows, so it was worth the trouble. 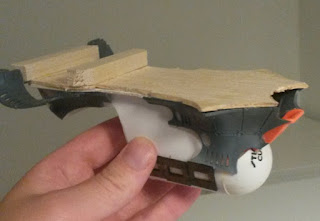 After a few nights of hobbying and listening to Garagehammer (except that episode when one of them hade the mic next to his bum and he farted and ate a lot, it was unbearable, had to turn it off) this is what I had to present to you. The top is made of soft balsa with some lazy scoring to "emulate boards". Barely.

These are some of the other parts that may or may not be added. The sky-balls can be seen in the middle. 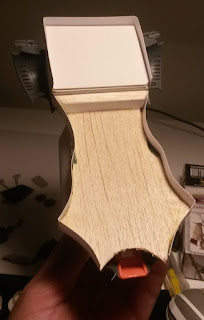 Wanted a less modern look on my Ironclad, so I went with the older looking style of a squarish command deck. 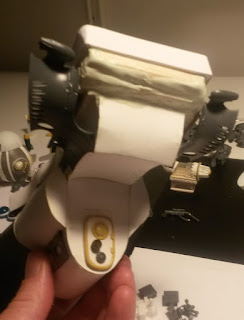 Simply copyied the design of the naval/submarine door as it was effective and nice, albeit slightly cartoony. With some thick - and bloody expensive - artist's paper I formed the rest of the hull. Placed the door at the lower aft as it would be "retarded" to have two doors on both sides of the "ship". 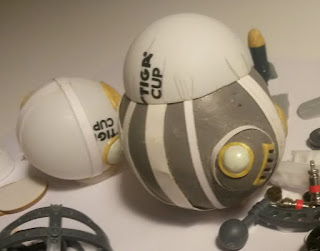 Fly-balls are getting shaped. Ping-pong balls to the rescue. You can see one of the bombs behind the large one. The larger one is made out of aluminium foil (took an old tinfoil-hat and reshaped it) and some polymer-clay which was hardened with a heatgun. The details are made out of Tamiya putty, various types I had lying around. 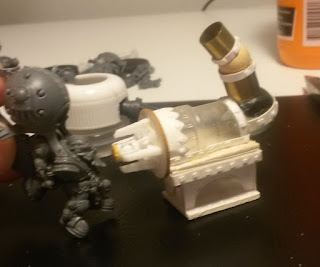 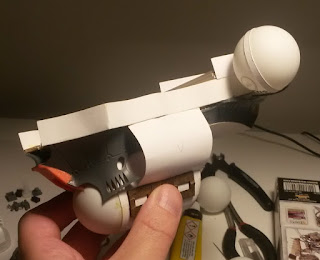 ... and this is where we are right now, wondering if I should put a ping-pong ball on either side of the ship. The problem is that the human mind is very calibrated to find balls and p3nis3s everywhere she looks, and there might be some pareidolian ramifications if I were to place two balls on either side of this ship. To put it simple: It might look like a horse cock. 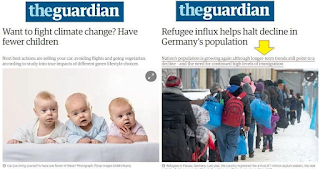 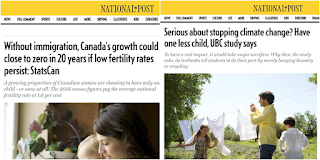 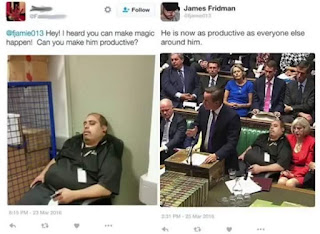 It might be a case of the above, shitpeople not giving a shit, and just giving everything away for their proverbial 30 silver coins... 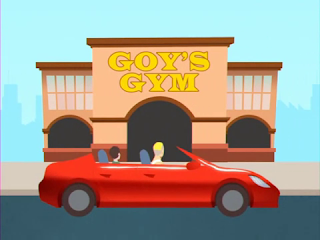 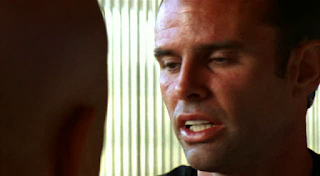 Edit: The guy that wants to buy the Arnorian Knights - SORRY, apparently I had already handed them over to another guy! Let me hear if you want me to make another round of them.
Upplagd av Llama kl. 11:55 2 kommentarer:
Senare inlägg Äldre inlägg Startsida
Prenumerera på: Inlägg (Atom)