Updated 2014-04-16. Added image of Rhûn army under Fallen Realms. I have decided to separate Rhûn, Khand, Harad, Far Harad and Umbar into two factions (instead of their normal one faction called Fallen Realms): Rhûn (containing Rhûn/Easterlings (the Weta-take on them, at least) and Khand) and Harad (containing Harad and Far Harad - probably also Umbar).
I should probably also add that Elven Realms has been split, in my version of War of the Ring, into two realms: Rivendell and its High Elves, and Elven Forests which contains the two realms of Mirkwood and Loríen. 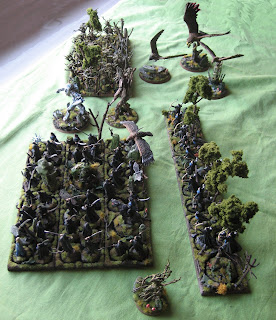 Elven Forests. The Edheldu army. Fluff has been written, lost and now found again! This one is 97% done and will be needing some painting-love and some mushrooms added to the trays. Always add mushrooms when you are a second grade themer... Mushrooms, along skulls, are probably the most overused fantasy decoration... 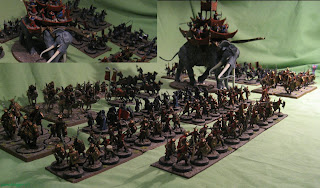 Fallen Realms, for War of the Ring, picture taken around 2009.

Greatly expanded in 2012, Fallen Realms were then split into two separate armies called Rhûn and Harad. The Sand Wyrm depicted in the Harad army - I do believe it is in here somewhere - was inspired by an illustration by Angus McBride (in a M.E.R.P. publication).
The Rhûn-army below: 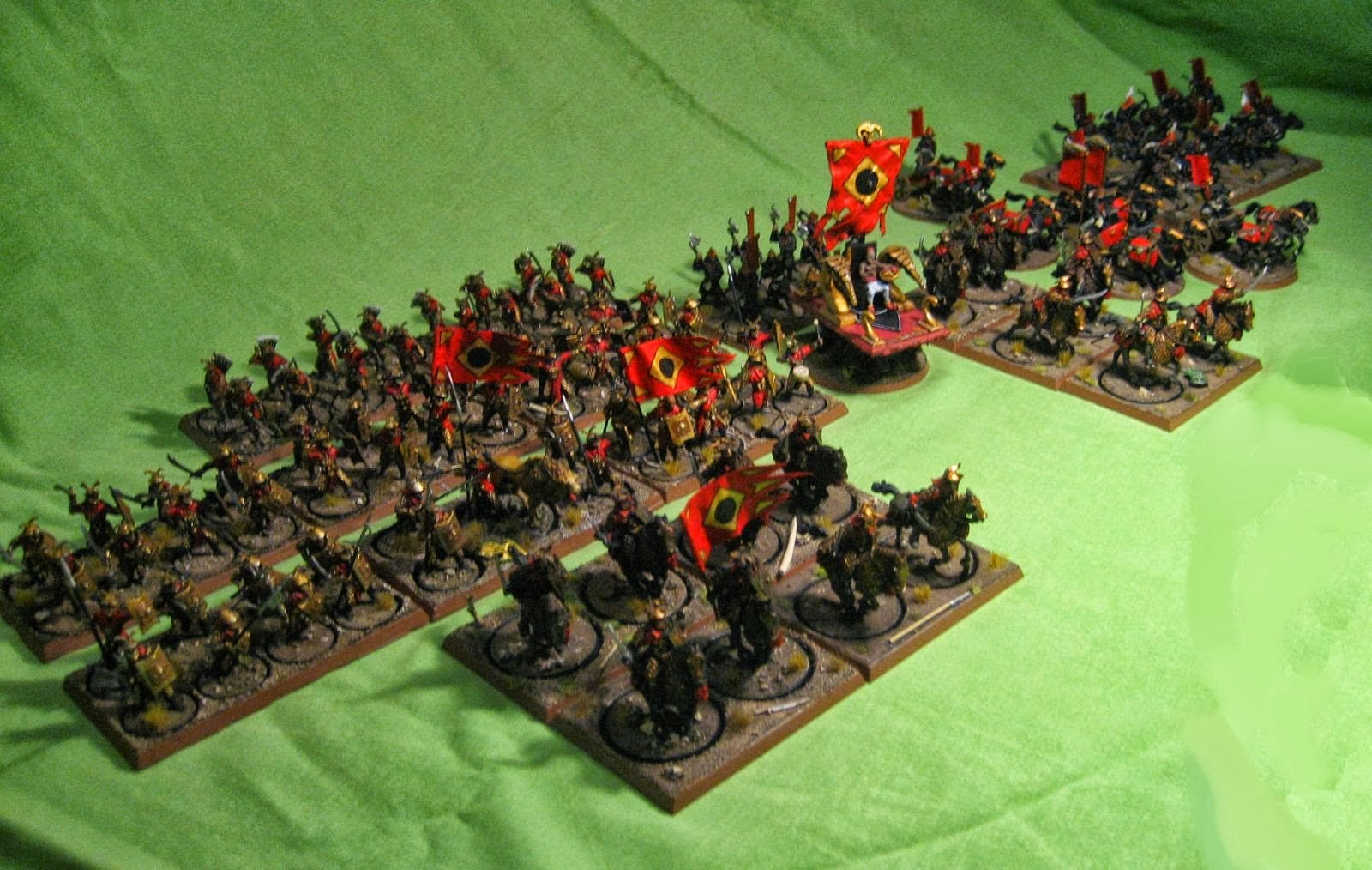 ... and the Harad army follows suit: 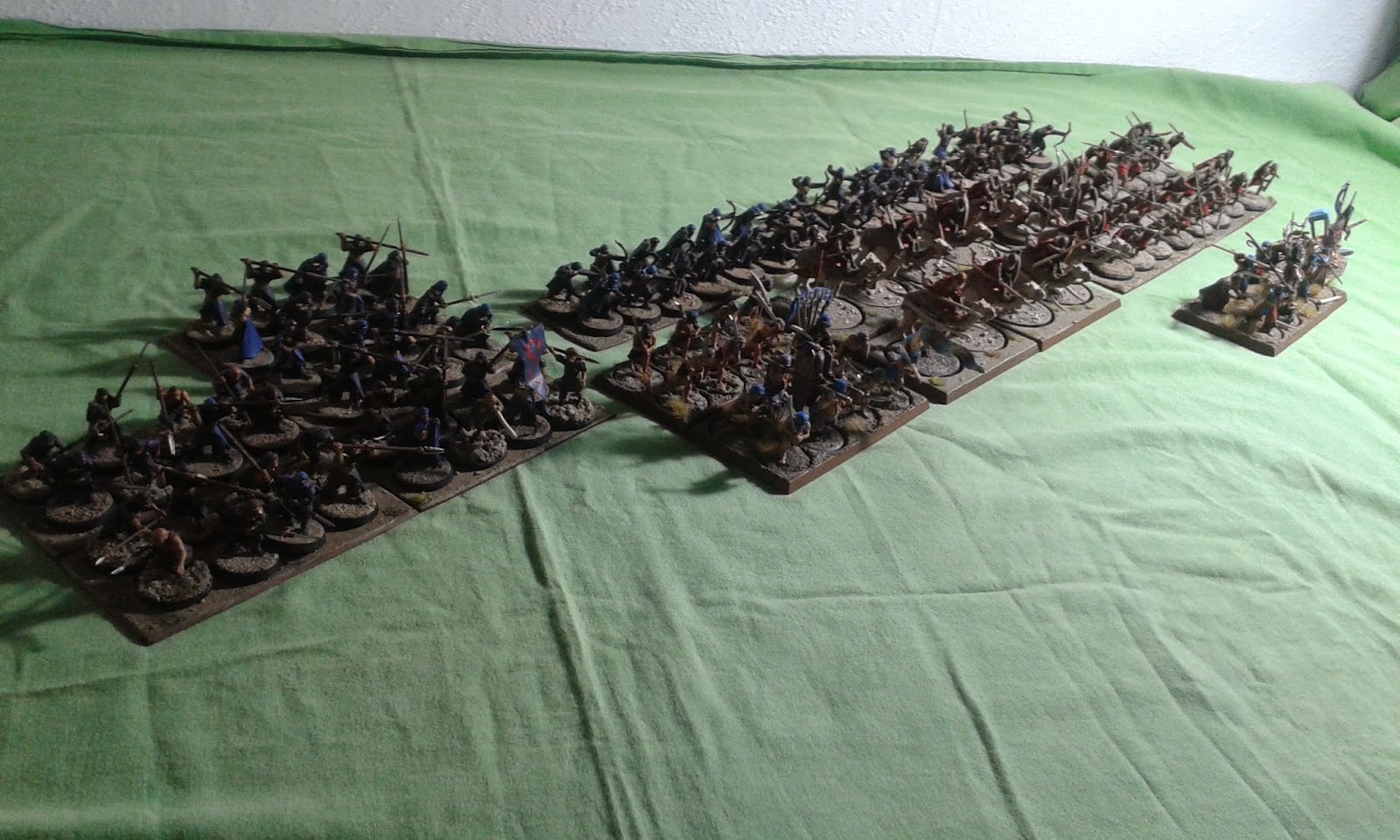 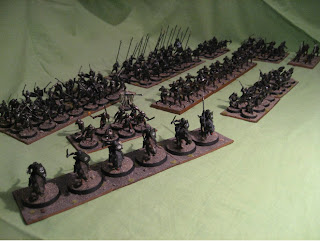 The Isengard Army is done. Except for, of course, some minor painting updates... perhaps adding some more converted Isengard Orcs, which I consider to be among my best work within this hobby.
All the trays and bases will be redone in 2015. 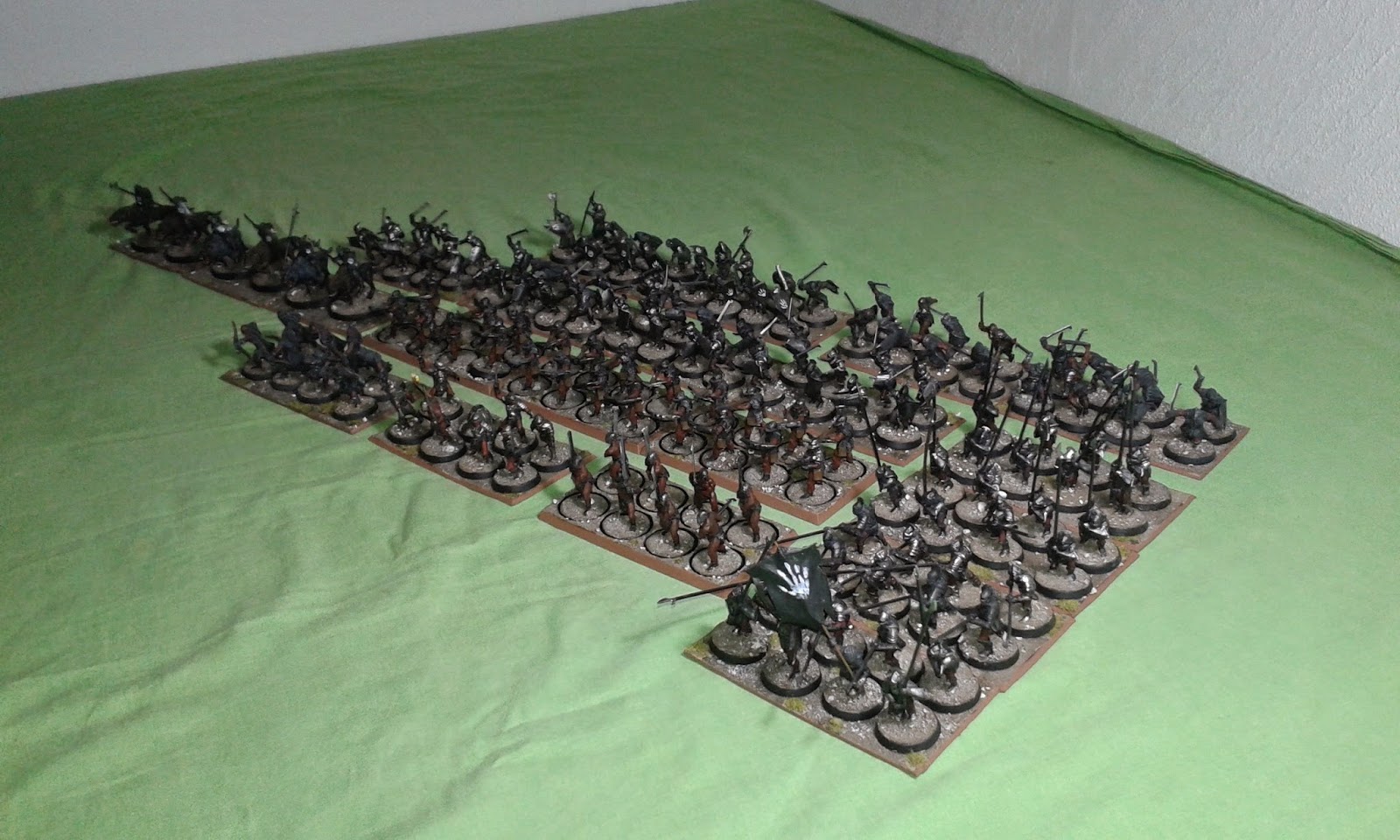 This upload still doesn't change the fact that this army need a lot of love when it comes to painting. 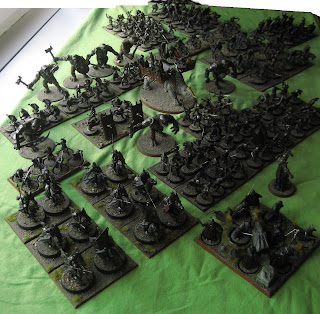 The Mordor army... image taken in backlight.With just a tiny little bit of work the Great Beast of Gorgoroth's and the trolls' bases now look much better. The rest of the bases and trays will be redone sometime 2014-2016...
... and now it is 2015 and I have painted the bases and trays: 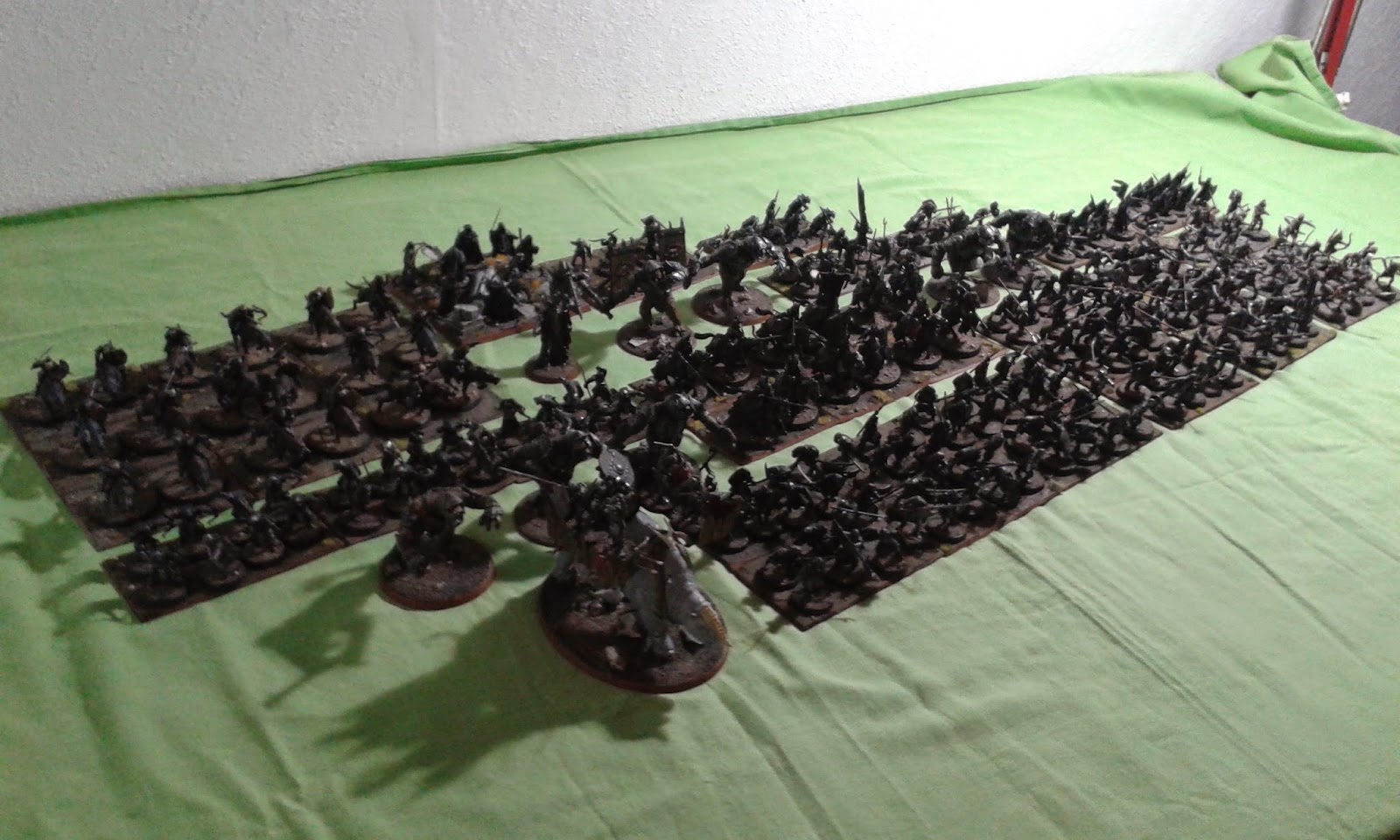 Elven Realms. This is the army that need the most attention. There are so many faults and bad paintjobs on this one that I don't even know where to begin. Also, a box of Rivendell Knights have been added - just cost me 36 GBP! Wow, The Hobbit-models are flipping expensive!
The reduxed version, photo taken in January 2015: 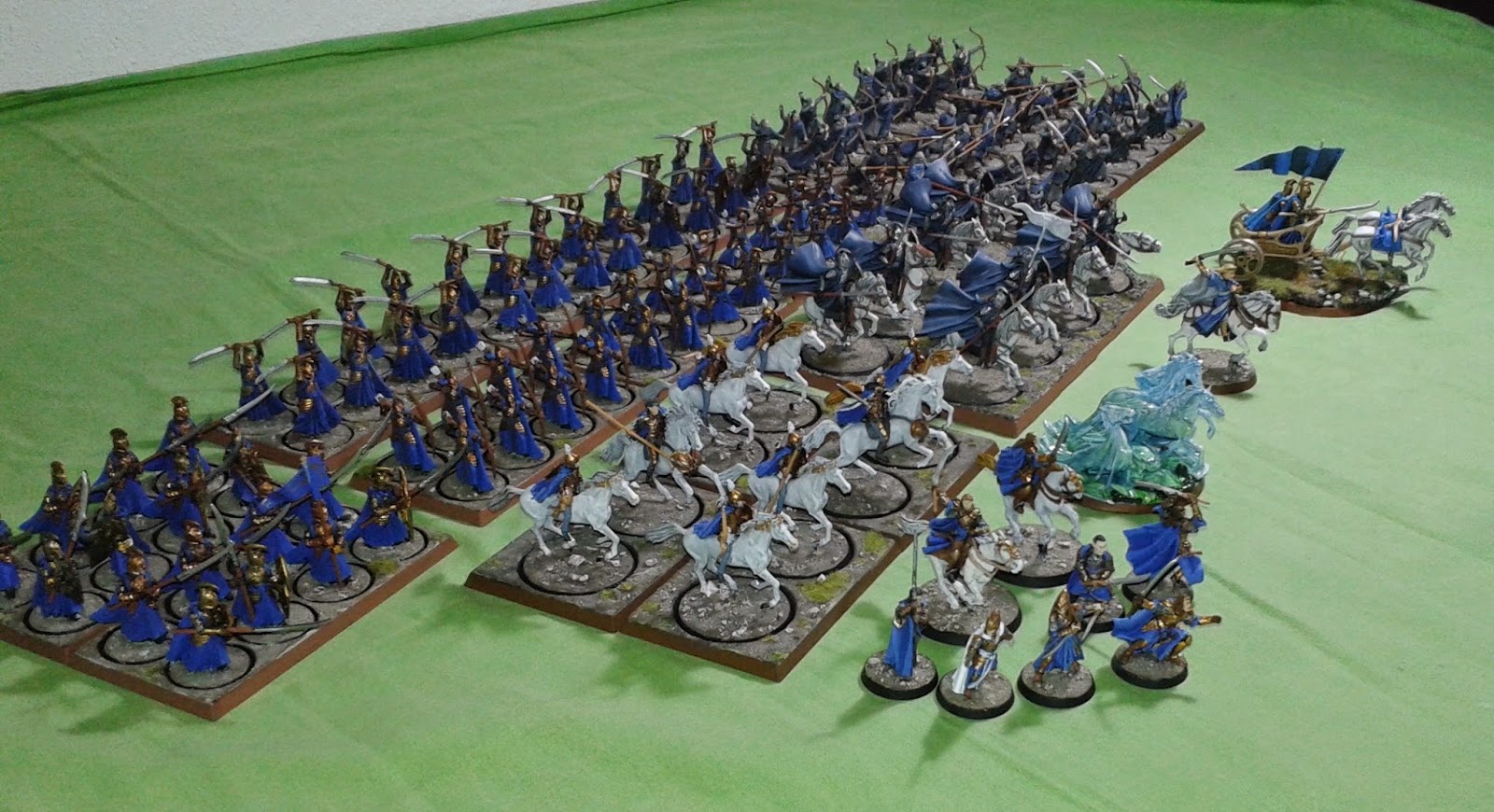 This army still has a long way to go. But the Rivendell Knights are fine. As I have probably mentioned before, the whole War of the Ring-business with clumping together Loríen, Mirkwood, Rivendell and Eregion into one army called Elven Realms, is not really working for me, so I have taken me the liberty to split it into Rivendell and Elven Woods. Elven Woods consists of Mirkwood and Lorien. This whole Edheldu-mess is being slowly disbanded. 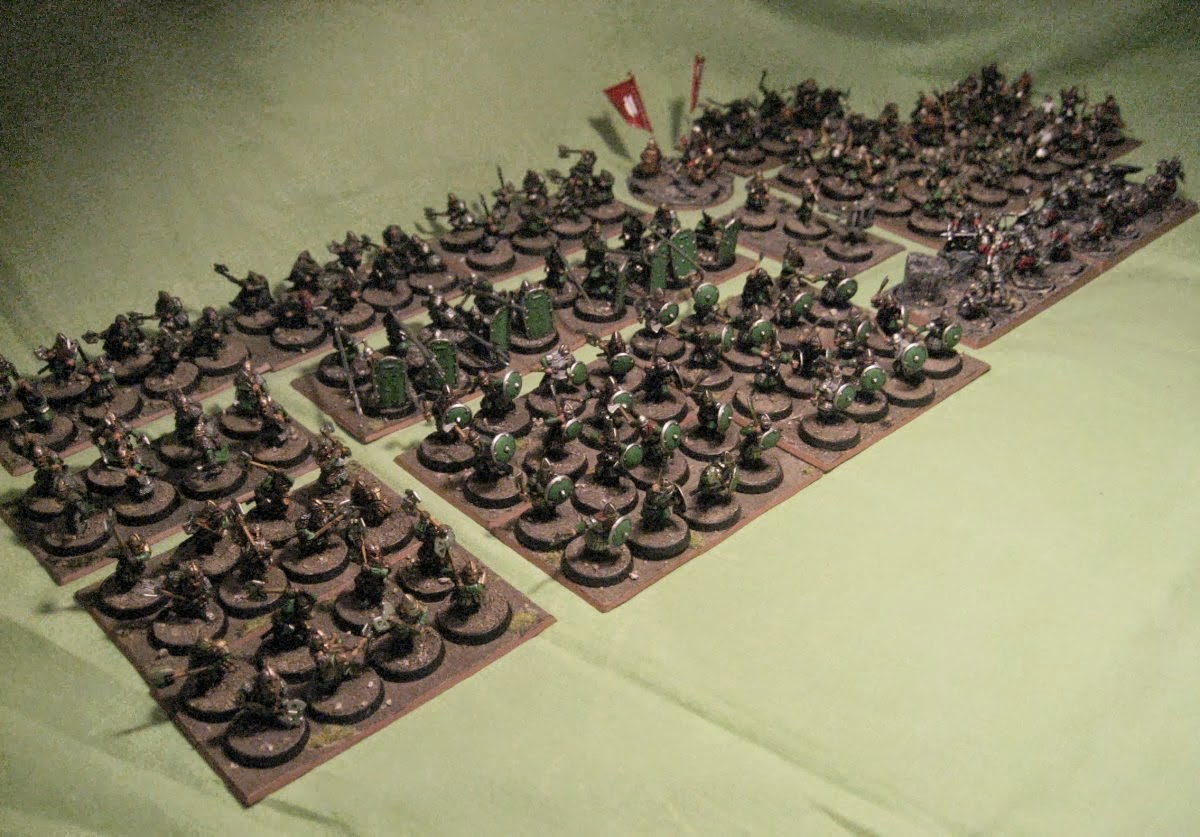 Dwarf Holds. One may notice the addition of a company of Vault Wardens, a King's Champion, another company of Dwarf Bowmen as well as a new company of Khazad Guard. This is one of my favourite armies. And I would guess one of mr FoB's favourites since he have beaten me with this one a couple of times. 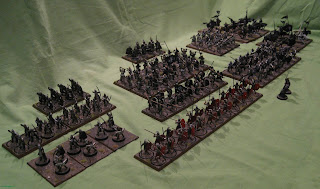 The large Gondor army. And of course, the updated image below:


In the center one can see the homemade Cart of Everliving Flame (with oxen from the Perrys). I have since this picture was taken redone it slightly and put it on a much nicer base.
Now it is 2015 and another update has been made: 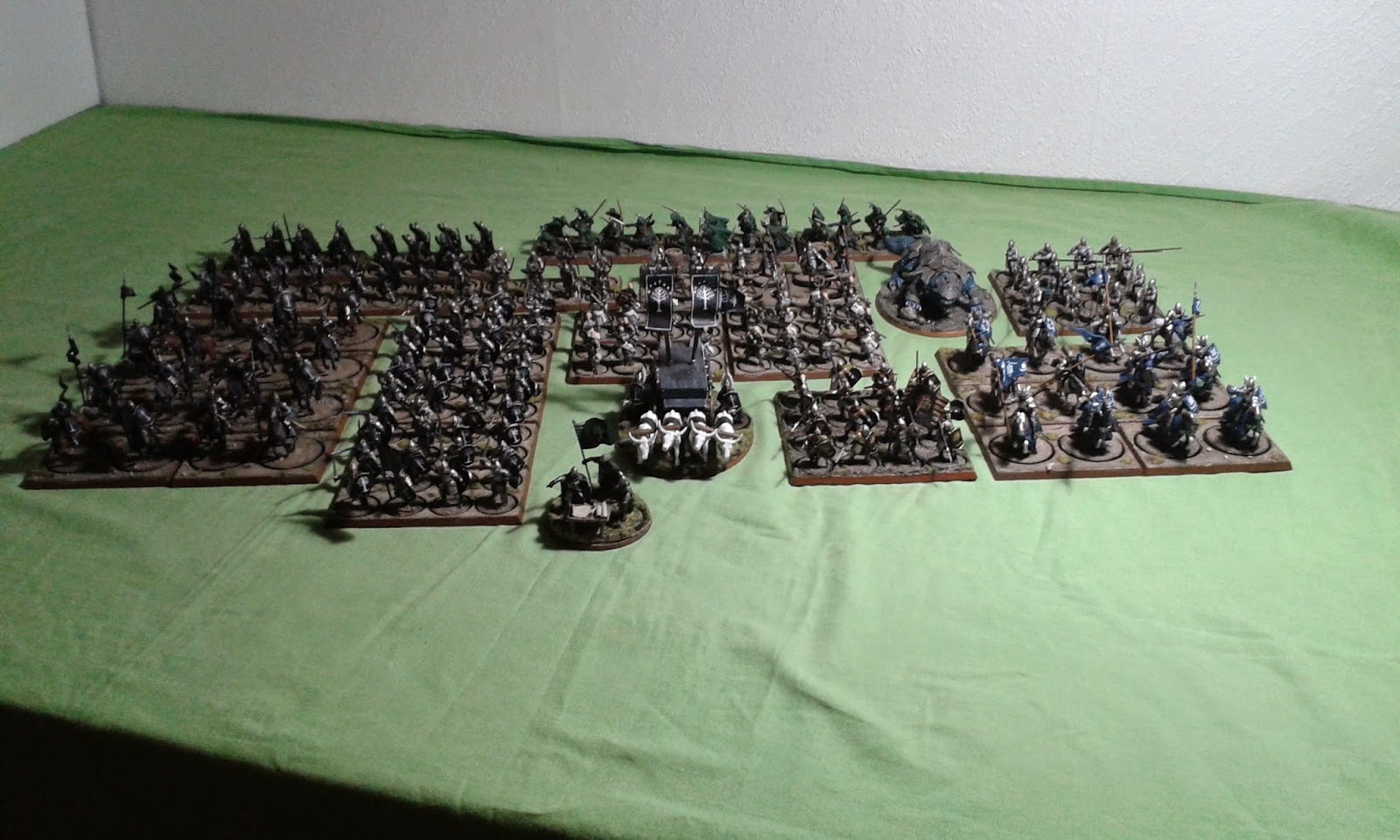 The Misty Mountains. This is the only canonical army that I have themed. Theming of canoncial armies, or armies in general, is something I typically steer away from for this simple reason: It is possible that your snow themed Dwarf army meets a desert themed Haradrim army and everything will look stupid. Simple as that.
This army has gotten so many updates and repaints that it looks really bad as of now, even flatter than it looks above, so they'll get some love and then I'll upload a better image. The army has doubled in size, see below for the 2014 image:

There's still very much left to do with regards to painting. Especially the bases will get some paint-love. 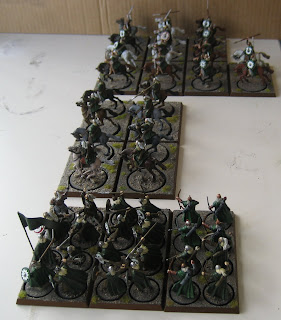 Small Rohan army... since this image was taken, I have worked on the bases and trays and added roughly eight different companies. It is actually quite a playable army by now! And here's the updated image:

Angmar army is up next - it is a modular project in that I have one part canonical Angmar and one part Agnam Laes filled with Mantic miniatures.
This is two thirds of the army. The rest is either unassembled due to space constrictions - around 40 Fallen and Ghouls - or unpainted (namely a Shade and something else, whatever it might be... ).

As a little sidenote, I would like to take this moment to say that the armies above are all compatible with the Lord of the Rings Stragey Battle Game, or as it is now known, The Hobbit - Strategy Battle Game.
Startsida
Prenumerera på: Inlägg (Atom)