Pheew, a few minutes inbetween work and other things, is making this post possible. The falukorv is in the frying pan, the sun is shining, my neighbours in front of my apartment are singing from the quran and the neighbour below is having a barbie with his "extended" family (somewhere along 20 people).

As it is now, I am quite pleased with how the current Rohan army of mine have turned out. But, I couldn't resist the little discounted Mounted Rohan Royal Guard (from figurspel.se). But, if it were to be ever used in a game of War of the Ring, how would I bulk a formation out then? With the help of good old Perry Miniatures, which, of course, are the same sculptors who sculpted the original Rohan Royal Guard. These are from their excellent Sudan range, namely product SB57. 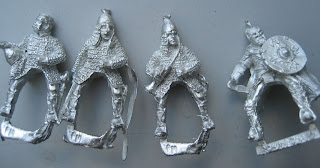 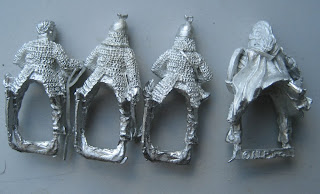 Here's the package that the Rohan Royal Guard came with. Notice something strange? 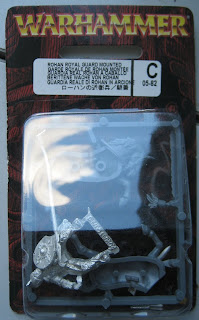 Stuck in a hole

Sorry, I have been stuck in my work-place which is why there hasn't been many updates. 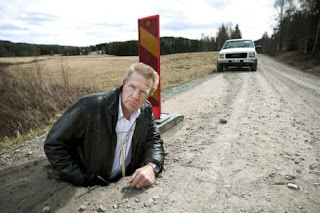 Picture from lokaltidningsbesvikelse (written in Swedish). The story behind the above image is: A man found a big hole in the road and stoppped his car and walked up to it. And fell in - even if the warning-sign is very apparent. The man is reaching for his cellphone when the neighbours finds him and takes this photo. They called for an ambulance and the police. Which was really lucky, because he got stuck with his hand in the jacket and would surely have died from fox attacks and water shortage.*


*) Different tense was used to create a more narrative theme (okay, I am extremely tired and couldn't keep my thoughts aligned).

Army of the Dead, Mantic Skellies

So, the hobbying has been a bit slow, but nevermind, I should get back to the normal Llama-speed soon enough. Today, we continue on the undead theme. Namely the Army of the Dead - which I'll never use how they were intended: for Gondor. In the books they are fine. In the movies they are acceptable. But, in the game I dislike the fact that one can field these incredible powerful spirits without Aragorn. So, the alternative is the Angmar faction from WotR - Ghostly Legion. 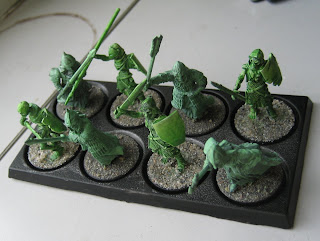 Addition of four Mantic Skeletons (it says on the Mantic homepage that they are discontinuing these Skeleton sprues) into the four leftover Warriors of the Dead from the plastic GW-box. Contrary to what many web-shops say (and for a while, also Games Workshop's homepage), the box contains 20 models, not 24. 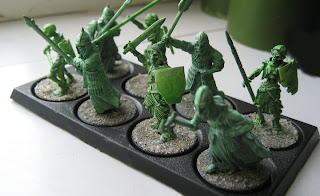 So, now we have three trays of warriors unlikely to be used. The GW Warriors of the Dead are good sculpts, very easy to assemble - the only thing I personally dislike is the size, they are very large, even bigger than the Mantic Skeletons (the Mantic Skeletons proportions are okay - it is just that they are tall, I belive "heroic scale" 32mm in contrast to the original 28mm GW-LotR figs).

Mantic Skeletons work fine for the purpose of bulking out a company of GW Army of the Dead. But then again, most models will look coherent as long as they are from any 25-35mm fantasy/historical and painted green... The samples above are, as usual, not finished.

That's all for the weekend, the springs finally turned into some sort of Ultima Thule summer, so barbies coming up: Chicken, haloumi and veggies on the good ol' neighbours barbecue which he forgets to hide from his lazy neighbours, time and time again.
Upplagd av Llama kl. 07:39 2 kommentarer:

So, after being inspired by someone (will have to look into this, can't remember where I saw it), I started making my own Ghulavar by using a Mantic Ghoul and some wings. I sculpted some bat-like wings and glued them to the creature. Wouldn't it look better if one were to remove the wings from the back and integrate them with the arms of the Ghoul?

Let us all laugh at the quality of this pic while I finish this drink - the drink of gods, AKA Dr Pepper Cherry - is it still an agnostic drink, though? 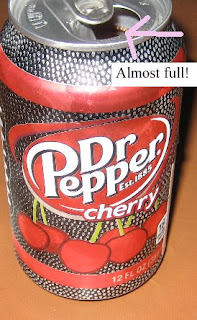 “What flavor is it? It is neither root beer nor cola. Nobody is sure what flavor it is, and nobody can be sure."

In other news, here's a Llama song, one of those annoying flash animations, but still, a llama is a llama. Found on the same page where the great Posting and You can be found. It must be well over eight years old now, an honorable age on the interwebs.

I have also been playing with the idea of doing redoing my Warg Riders. Dramatic Katastases have provided me with some inspiration - Warg Rider drummer.

Or High Elf bolt thrower. This little project is an attempt by me to try to familiarize myself with the design of the next grand project: The High Elf Catapult. Or Galadhrim... 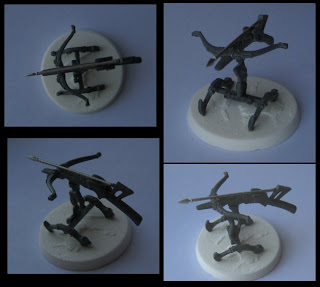 Inspired by a Singer sewing-machine and imbued with the sea-faring feeling of some of the Elvish races (hence the slight nod to a harpoon), it turned out adequate in overall design, and really nice in the final "finish", if you know what I mean with that.

A confession must be made in order to explain the building process: I recently ordered a bunch of minis and models from figurspel.se, and allowed me to buy a WHFB HE-chariot - just for the lions! My recent failures at sculpting a lion, and incapability to find a lion the right size anywhere in this soon-to-be-"developing" country - made me take this drastic, dare I say extreme(?) step! Most of the parts that was left over shall be shipped to anyone nice at the Warhammer Forum. And a few pieces I used to this project, namely: A bow from an Elf arm and two side-pieces from the chariot. The spear (now bolt) comes from Tom Meiers forge and the rest are made from sprues. It is based on a 40mm base and works nice with the newer Elf sculpts from GW, the Galadhrim Warriors, to be precise.

Work on the Ringfürhers are progressing. Their individual bases will get some more paint and perhaps a few tufts of static grass. Some of them are screaming for more GS-work, and so, I will do this. But this in turn generates more work in the painting department... hm... 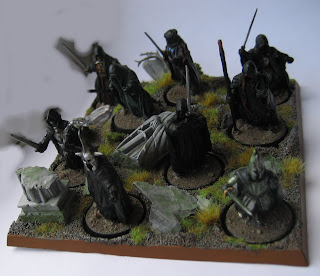 What do you think? Should I add green moss on the broken base of the statue? This was my plan all along, to make it aesthetically "sink" into the rest of the tray in order to have not stand out as much. 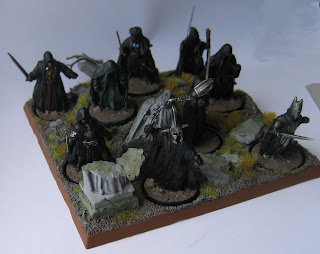 Other projects, just a little sneak-peak... the base project I've been talking about. From the beginning it was much more ambitious, but something happened: I got some spare time over, had made a few bases - they weren't even 100% finished - and realized this project will never be done if I keep thinking it have to be perfect before starting. So, I made a really crappy "rat swarm" and an additional nature/forest base and started mixing the silicone. The cast bases turned out adequate, but I can't think of many miniatures I currently own that I would want to use these bases with. 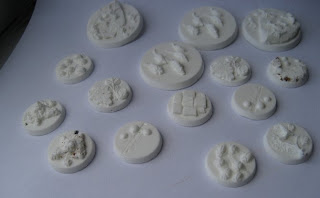 And what do we have here? Yes, it is Perry Miniatures Men at Arms, archers in fact... These are my own and will get a colourful paintjob. That's it folks, see you next weekend unless something really great happens before that... Bye! 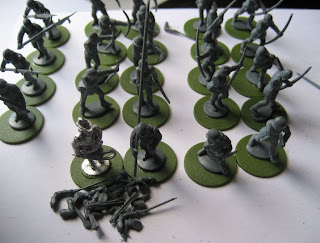 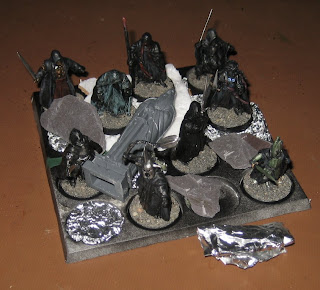 The plan is to make a little press mould of the statue, put some putty approximately where the plastic statue lies now and just squeeze a new statue in there. The project is proceeding according to plans. I look forward repainting The Nine, from back left: Khamûl the Easterling, the Tainted, the Undying and the Shadow Lord. Right in front of the Shadow Lord, we find the Betrayer, based on a Citadel Guard spearman.

Next tray: the Dark Marshal (will be slightly reposed, he looks too... strained), the Dwimmerlaik (of the nine here, the one IMO that is least alike the official model - he looks too generic). In the front row we have the Witch-king of Angmar, which was the first I did and accordingly so the one that needs a face-lift the most. To his right we find the tiny Knight of Umbar, based on a Warrior of the Last Alliance that got a head swap with dying Isildur (Sauron boxed set). And we all know how very small the first models produced for the LotR Strategy Battle Game were, are, compared to later models. I will keep him anyway.
Upplagd av Llama kl. 12:15 2 kommentarer:

First of all: Can someone push me in the right direction regarding uploading PDF:s? The platform used for this blog seems to allow only images and movies, so if you know any simple, free way of uploading PDF:s, let me know, and maybe you will get a small gift by the mail. The only thing I demand from a potential service like this, besides being free and simple, is that possible downloaders will not have to maneuver through a heavy advertised page that looks like something from the late 90's...

Second, as the creative title suggests, this is just a random update with little of this and that, with things that's been on my mind on the subject of our hobby. I am working on my own version of the copied project of a Gulavhar, based on a 40mm base, using a Mantic Ghoul and some sculpted wings. It will not be Gulavhar, merely a test model for future projects for my undead project. Finished the Golden Warriors of Minas Tirith, just have to paint the banner. Pics will follow.

Found on GW:s blog, an image of the Swordsmaster of Gondor, or whatever he is called. Is this released? 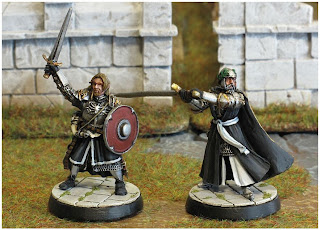 The Narnian army that has been mentioned here a few times was made by a mr Jeffrey McLeod. It is a truly inspiring work and he deserves all the praise he gets - I mention this because there has been some traffic in to this blog because of me mentioning a Narnian army, when in fact there are none here (not saying it can't happen in the future, though). Sorry about that. Here's the link to his page.

When searching for SVT Pravda Play, there was a typing accident that amused me, it seems this is such a common mistake that Google suggested it. This is, of course, not the only time it has happened - there are plenty of far more amusing examples - but this is just so... stupid. Öåay, that's how football hooligans sound.